MSU Hospitality Business Association brought home the Best Spartan Spirit” award. This recognition represented more than the most creative homecoming float; students said that their goal was more about a shared pride. “I love being able to show off how great my major is,” said Alex Trompke, a junior Hospitality Business major and president of The Hospitality Association. “It’s really cool to get little kids and parents to fall in love with our major and what we are about.” Tradition runs strong for the Broad College of Business’ School of Hospitality Business, and not just in their rankings as one of the best hospitality programs in the nation. Every year, MSU’s Homecoming Parade gives the HB community an opportunity to showcase widespread pride for the program—and 2016 proved no different.

It took a lot of planning and dedication to have the float ready for the parade on Friday, October 14th. Didi Bibi, senior Hospitality Business major and COO of the MSUHBA, took on the lead role for the float-building, despite having no prior experience with homecoming festivities. “I’ve been planning for the past two months,” said Bibi. “I’ve been getting around four hours of sleep. The float is all I think about!”

This year’s homecoming theme was “Spartans for Life,” and with such a large alumni network, the group felt confident they could work with it. “We wanted to focus on showcasing the success of our school while encouraging future generations to leave an even bigger legacy,” said Bibi.

Through collaborating with her peers and finding key trigger words to focus on, Bibi and her team came up with the idea of having a globe be the focal point of the float, with important dates to the HB program placed on the perimeter of the float.

After the last date on the float, which showcased the program’s no. 1 public university ranking, a place card looking into the future stated “it’s OUR time.”

“We didn’t want to just leave the float hanging with the last date,” said Bibi. “We wanted to make an impression on current and future Spartans that it’s their time to leave their legacy. No matter what program you’re in or where you go in the future, it’s our turn to make an impact. Any Spartan can take the next step.” 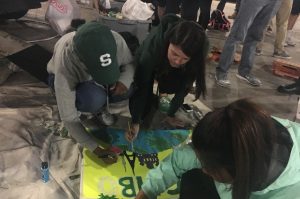 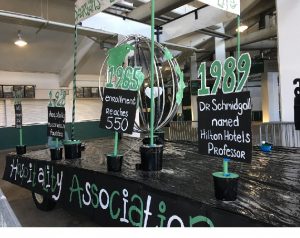