Lori Hillman started her professional career as a product engineer after earning her Bachelor of Science in Engineering at Michigan State University. After many obstacles faced and hurdles removed, Hillman is currently the vice president of quality at Eaton and is responsible for 15 different plants in the North American region. With a little over 100 different individuals on her team, it’s her job to set the regional quality strategy and ensure the strategy gets executed, working alongside her team to solve any issues that arise. In addition, Hillman ensures compliance and customer requirements are met, and she oversees training and development of the regional team. 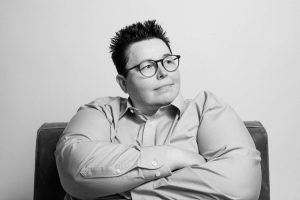 “My bachelor’s degree is in engineering,” Hillman explained. “So, my background was primarily technical, but I knew I wanted to move up in the organization and had the thirst to do more in my career. Ultimately, I wanted to achieve a business manager role and I wanted to run one of the business units. I really wanted to impact the customer and add value to the company.”

In 2014, Hillman decided to pursue her MBA through Broad’s Executive MBA program in order to gain more insight and experience in the financial arm of business and, ultimately, chase after her dream of running a business unit.

“I worked for 15 years in my career before I got to this point where I knew that in order to move up within the organization, I needed that financial and business background in addition to my education in math and physics,” Hillman said. “I felt I had the ability to be more strategic in my position, but I wasn’t perceived as having these skills since my background was technical in nature. I knew the MBA would provide the additional skillset that I needed to reach my professional goals.”

Hillman graduated from Broad’s Executive MBA program in 2016 and eventually became senior launch manager before she moved into her current role as vice president of quality.

“The MBA program made a very quick impact on my career,” Hillman said. “Even while going through the program, I could immediately see the benefits of what had been taught. For example, I would be sitting in class on a weekend and learning something new, and then on Monday morning I would go back into the office and encounter the same thing I was just talking about and learning in the program. I was able to apply what I was learning in parallel, and that alone contributed to a tremendous amount of personal and professional growth.”

Learning how to effectively manage her time and create a healthy work-life balance also added to Hillman’s personal growth during this time.

“I would say that time management was a big piece of the personal growth for me,” Hillman said. “There were times when family weddings or family birthday parties occurred on a Saturday, and I was in class. My family and extended family supported me 100%, knowing that some of those commitments I wasn’t going to be able to make. It really became about balance. And I don’t think that’s necessarily specific to the program — I think that work-life balance is something that we all struggle with every day, regardless of getting an MBA. You just need to know where your limits are and what you really need to do for yourself in order to be successful. Sometimes that means putting in the extra time instead of going to a family party, and sometimes that means giving yourself some personal time to get a recharge.”

Outside of her family support system, Hillman mentioned that she also had a great relationship and mentorship with her manager at the time.

“My boss had a tremendous amount of confidence in me and saw something that, I think at the time, I didn’t even see,” Hillman said. “He gave me an opportunity to really learn the insight and leadership that he had, and he is still someone that I look up to today. I think between the program and learning from him, I experienced the most amount of growth and confidence building.”

Hillman admitted that an initial lack of confidence was due, in part, to her humble upbringing and the disproportionate number of women in the STEM field.

“I grew up in a really small town, in Vassar, Michigan,” Hillman said. “When I started my first job, I was one of three women in engineering trying to learn what to do in my career. For me, it wasn’t about standing out at that point. It was about trying to figure out how to fit in. It was hard enough being the new and young addition to the team. But then I was oftentimes the only woman in the room, too.”

Unfortunately, Hillman said that even after 20 years in her career, being the only woman in the room has become a constant in her industry.

“I started my career being one of the only women in the room, and I’m still one of the few women in the room,” she said. “I’ve seen a change over the years, but there are still a lot of societal norms and pressures. People say things like, ‘You can’t have a family and a career.’ Trust me, you can have a family and a career. It’s about making those choices, understanding your boundaries, and knowing what you’re willing to sacrifice and what you’re not.”

One reason Hillman believes the industry faces such disproportionate numbers of female to male executives is the lack of women in leadership roles.

“We need to give more women leadership opportunities, because our younger women need to see that representation and see strong women leaders to know they can be successful,” she said. “We must be telling the younger generation that this is possible so that they believe, and I mean truly believe, that they will have every opportunity in front of them. For me, that representation means being visible within my organization and mentoring other women. I participate in a lot of women’s resource groups and speak at events about career challenges. These events are huge reminders for me of how far we’ve come and how far we still have to go.”

Hillman also believes those in executive positions have the responsibility to help eliminate some of the career challenges women face.

“I’ve seen women before me that have made it to executive levels and have this mindset that because they had to clear some of those hurdles on their own, it’s like a rite of passage for the next generation of women to do the same,” Hillman explained.

“But I believe, as women, we should be removing those hurdles and making it easier for the next group that’s coming through in their careers. We should be empowering women.”

Hillman has made it a priority to remove some of those hurdles for future generations and has pushed herself to be more extroverted in her personal life and professional career.

“I’m an introvert at heart,” Hillman said. “But I believe in growth through being uncomfortable, and I figured out how to be an extrovert when I need to be. I don’t want to be in the spotlight, but when it comes to this platform, I have to be. I have to be one of those advocates that’s out front leading that change.”

Blogs
A study in DEI and business opportunities in Spain
MBA student Ajinkya Virulkar details the study-abroad immersion he shared with classmates in Barcelona and Madrid.
Alumni stories

1,000 graduates: Celebrating MSU’s Master of Science in Management, Strategy and Leadership alumni
With the Class of 2022, MS-MSL officially celebrates the graduation of more than 1,000 students from the program.
Blogs
Supply chain, sustainability and sangria
MBA student Fiona Kristo writes about how her immersive experience in Spain broadened her perspective.
top