With an MBA, Broad alumni create value between the lines

Kevin Jackson, a senior buyer — licensed movies at Target, has had to take a few leaps of faith in his academic and professional career so far.

Born and raised in Detroit, Jackson grew up playing basketball and was driven to continue the sport in college. While he was applying for scholarships, his coach at the time encouraged him to run track to stay in shape — a move that ultimately led him to Michigan State University. 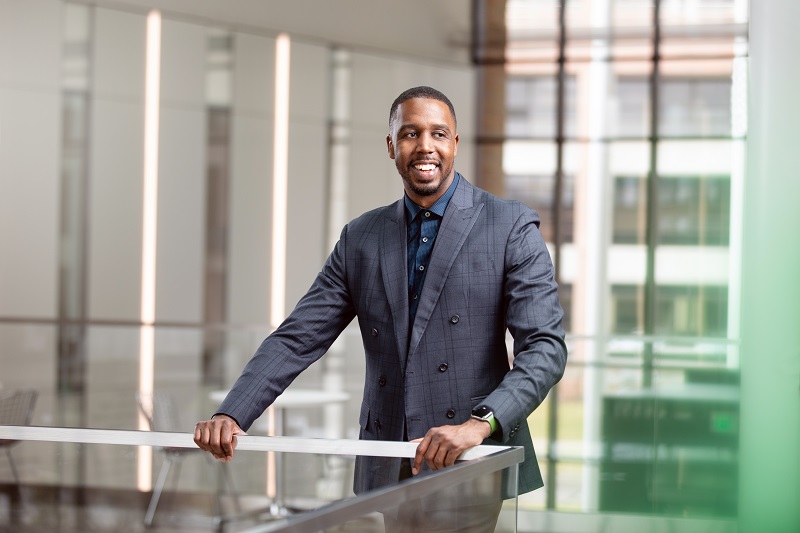 “This was my first leap of faith as I was a track high jumper,” Jackson said. “Every school I applied to asked me to run track for them, and this elevated me to a different area, something a little bit more uncomfortable.”

He became a lettered student athlete and team captain for track at MSU and a political science and economics major. Serving on the Big Ten Student-Athlete Advisory and Advocacy Committee exposed him to lawyers working on issues facing student athletes in the Big Ten. Pair that with an internship at the State of Michigan and his interests in law were blossoming. Jackson felt a law degree was a natural next step to continue to find ways to empower the community.

“I went to law school to do business, and what I quickly learned was that you don’t learn business in law school,” he said. “So, I had to learn how to do that.”

Through his law classes, Jackson observed JD/MBA students enrolled in the dual-degree program, a collaboration between MSU’s College of Law and the Broad College of Business’ Full-Time MBA program. He was excited about the internship experiences that those students were having, and he noted the well-rounded contributions they were making in classroom discussions. Jackson decided that a JD/MBA would help him become the leader he was envisioning.

With a political science background, Jackson said he wasn’t a traditional candidate and didn’t get into the program the first time around. But that didn’t deter him.

“I have a history of taking leaps of faith, and I knew it would take effort to open the door, be connected and advocate for myself to be admitted.”

When Jackson was accepted, he quickly found his stride. He compared law school to running track, as an individual sport with autonomy, not being dependent on other people. And he described the MBA program as a team sport, going back to his history in basketball.

“The MBA program was team-based, and it sharpened my tools for how to work with people again, influence without authority, getting to know people and having relationships, networking,” he said. “Those are things I was good at naturally, but I hadn’t had the chance to sharpen those in personal and professional settings.”

I think the JD/MBA gives me breadth and depth in how I think about things and in the opportunities that I pursue and the impact that I can make.

While in the program, Jackson met one of his best friends, gained international business experiences with a trip to Austria and Germany and homed in on supply chain management and procurement as a passion for his career ahead.

“Before the program, I didn’t necessarily know what supply chain was — I didn’t take those classes in undergrad, so I had to figure out what jobs in supply chain were,” he said. “Quickly, I knew that procurement was interesting to me because it’s more relationship-based and you can be creative in how you bring solutions together.”

Playing both legal and business roles

The dual-degree program helped Jackson forge a strong foundation in skills like negotiating from the lens of both law and business — a unique standing that has helped him create value between the lines in his role at Target.

“I think the JD/MBA gives me breadth and depth in how I think about things and in the opportunities that I pursue and the impact that I can make,” he said. “It allows me to speak different languages, open doors and make connections. I use that to break down barriers and to bring people together — groups that may not be connected otherwise.”

Jackson has been working at the American retail giant since he left the banks of the Red Cedar in 2018. Today he’s part of its leadership development rotational program on the merchandising leadership track, where he applies his cross-functional background to advance Target’s merchandising and operations strategy.

“I love and want to embrace being a liaison, playing both legal and business roles and adding value between the lines, because I think that’s where it gets lost, and that’s where I’ll build a career.”

As for advice for current and future Broad Spartan MBAs, Jackson shared three points: Take time to network and connect with others, ask questions to stay engaged and curious and, of course, don’t forget to have fun along the way.

“There are lots of challenges in the MBA experience, but the program is also built so you can go out with the strength and muscle memory to persevere through challenging things,” he said. “If you go through the program with a perspective of energy and fun, I think that allows you to bring people along and help break up the challenges that come up in everyday life, and it allows people to want to work with you.”