Pung Speaker Series: A Spartan’s journey from the State News to the Wall Street Journal

Eric Morath (B.A. Journalism and Economics ’04) is an economic policy news editor for the Wall Street Journal. Over his career, Morath has worked for the Detroit News, Dow Jones Newswires and other major publications, covering a range of topics around the automobile industry, technology, bankruptcy and now major economic news. 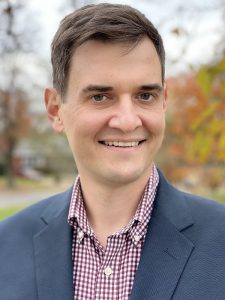 On March 31, he was featured as a speaker in the spring 2022 Roy S. Pung Executive Speaker Series. He explained how he found his passion for journalism while working for Michigan State University’s student-run newspaper, the State News.

“I was hooked on the adrenaline of deadlines and finding information,” Morath said.

As an undergraduate student, Morath discovered he was a good business reporter but was missing the knowledge and perspective needed to explore the economy and financial markets. Through his second major, in economics, Morath was able to understand how economics affects real people.

Morath was a labor economics and policy reporter at the Wall Street Journal from 2017 to 2021, where he was introduced to record-breaking numbers and a changing market before, during and after the lockdown in reponse to COVID-19. He explained, “When looking at economic data, you must ask, ‘What can we compare this to?’ and ‘What should we be asking?’”

In terms of the labor market during the pandemic, unemployment rates skyrocketed and there were significant changes in the safety of jobs and the way Americans thought about work.

“People may wonder why we have a low unemployment rate but are also showing 100,000 fewer jobs; this tells us the economy has less potential productivity,” Morath said.

One thing for certain in the labor market is that it’s typically good for college graduates. Morath said that the unemployment rate for graduate degree holders is 0.8%, with most of that attributed to employee churn and those who leave a job while seeking another. (For bachelor’s degree holders, the jobless rate is about 2%, versus 3.6% overall.)

Morath also shared that he is currently working on ranking the hottest job markets in the country. The metrics he must consider include unemployment, job growth opportunity, share of population engaged in the labor force, increase in labor force and wages. He has found that of the top cities, most are state capitals where there’s a stable workforce and the city is a hub for technology as well as higher education.

In our present economy, with many prices increasing, inflation was a topic that encouraged student perspectives and raised questions. Morath discussed factors that contribute to inflation, what it means for the labor market and the status of the Federal Reserve.

“In terms of economic news, the rise in prices overshadows the labor market,” Morath said.

He explained that recent inflation was initially seen as a temporary phenomenon. Over the past couple of years, he has observed the impact that stimulus checks and low interest rates have had on the economy. He said people were splurging on new cars and vacations, simply because they had the money. More recently, he is seeing a rush of demand and a shortage of supply, which contributes to inflation.

There are also concerns in the labor market for low-income individuals when inflation starts making a difference in prices and the cost of everyday goods.

“Rising prices for necessities hits lower income people harder, which is a potential concern in the current hybrid environment,” he said.

In bigger cities, most people work in central downtown locations that can be reached via public transportation. When those jobs were no longer available during the pandemic, there was a rise in openings at places like Amazon and e-commerce warehouses. Morath explained that these places are located on parcels of land where it costs less to build, but getting there requires highway transportation rather than public transportation.

“You can work, but what are the costs if you have to pay for other resources?” Morath asked.

Reporters like Morath are wondering if workers will have the bargaining power to offset inflation. Being a reporter for the Federal Reserve, Morath quickly mentioned the tricky spot they’re in and the areas he sees for improvement. The raising of interest rates and external concerns elevate the risk for a recession.

Cryptocurrency is one of the hottest topics in Washington, D.C., where Morath resides, and he was curious to hear the students’ thoughts. He shared how cryptocurrency is based on a decentralized system, but regulators are concerned about whether it can be manipulated. There have been legitimacy issues, along with a lack of stability, since investing in cryptocurrency assets can be risky and the value changes.

Some questions that arose:

Students who gave their insights viewed cryptocurrency as an investment vehicle. Some mentioned they have put money into cryptocurrency to see if it’s worthwhile and to be a part of what may transition into the future of transactions. Others expressed they see it as a way of transferring wealth virtually.

Morath added that it’s either the future of payments in the economy or the next crash. “It feels like the wild west to me. It’s a top issue to do more reporting and expand knowledge on,” he said.

Through the timely discussion and presentation, Morath left students with a better understanding of economics from the perspective of a prolific journalist.