The latest event in the Roy S. Pung Executive Speaker Series featured Michael Lamach (B.S. Applied Engineering Sciences ’85), retired chair and CEO of Trane Technologies. Lamach has spent his career in manufacturing and industrial markets, including 17 years with Johnson Controls before joining Ingersoll Rand in 2003, where he worked in various leadership roles before being named chair and CEO in 2010. Under his leadership, in 2020 the company separated its industrial businesses and relaunched as Trane Technologies, a global climate innovator focused on challenging what’s possible for a sustainable world. 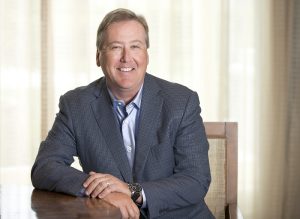 Lamach’s presentation to Broad College undergraduates was centered on how his focus on environmental, social and governance issues and stakeholder capitalism led Trane Technologies to success. He expressed that holistic thinking is important when leading a company that’s evolving — you have to look at not only what is good for the company but also the company’s performance for stakeholders and the environment.

“When you’re leading a company, leading with a purpose matters,” Lamach said. Creating value for team members, customers, shareholders and communities through a sustainability-focused strategy was core to his leadership.

During Lamach’s tenure as chair and CEO, Trane Technologies became one of the most widely held industrial stocks by ESG investors, given its top-tier financial performance as well as its leading ESG performance. This meant Trane Technologies could build longer-term relationships with investors, providing differentiated shareholder value over time. The company’s total shareholder return over his tenure was more than 700%, nearly twice the total shareholder return of the S&P 500.

“Finding a system and innovating to reduce carbon emissions and increase access to food will change an industry,” he said. “When you invent a system and stay on plan, competitors are required to innovate to keep up with the industry.” Lamach and his team were successful in developing technology that can reduce emissions from heating and cooling by 99.9%.

“We are a company who was green before it was cool to be green,” Lamach said. This movement boosted employee engagement by motivating employees around a purpose, which also led to attracting and retaining those same people.

“It’s a virtuous cycle of people and performance. If I have engaged people, I would have better customer outcomes. If I had that, that leads to the best shareholder performance,” he said.

Attracting different talent into the company remained one of Lamach’s biggest accomplishments for creating a diversified workplace with opportunity for all. “People are the most important asset,” he said.

Lamach was the first CEO of an industrial company to join Paradigm for Parity, a movement that aspires to reach gender parity in corporate leadership by 2030.

“I planned on creating an organization that matches what the community looks like,” Lamach said. He took action in expanding the diversity among his board of directors to increase the representation of women independent directors as well as racially and ethnically diverse board members.

“If you don’t set out aspirational goals and create an environment for innovation and creativity, you won’t get where you want to be,” he said.

Trane Technologies set extensive sustainability goals for 2020 and met them two years early. Under Lamach’s bold leadership, the company followed with even bolder 2030 commitments. Lamach shared that in 2018, he was presented with two documents: the 2018 strategic plan and 2030 sustainability goals. The two documents were well aligned, which signified that the strategy of the company was focused on fulfilling a greater purpose, measured through the commitments made for 2030.

“Good companies that do good” was a way for Lamach to make continuing commitments toward communities. Providing time for the community and serving philanthropic efforts was also a metric used to measure value created for stakeholders.

Today, he is an advocate for education and economic mobility and is active in the community of Charlotte, North Carolina, as chairperson of the Charlotte Executive Leadership Council, for a coalition of CEOs serving the community.

Lamach shared advice for students embarking on new careers, exploring companies and the future of leading.

“It’s important for you to start building your own mental model for leading,” he said. “You shouldn’t be satisfied with less than that.” It’s important to understand what the company you work for stands for and the purpose of who you work for. “Be a good team member. When you get to a company, it’s not about getting in anymore; it’s about contributing to the team,” Lamach continued.

Lamach’s successful leadership has led to recognition by major platforms. In 2019, Harvard Business Review named him a top-performing CEO and Forbes included him as one of America’s 100 Most Innovative Leaders.