Darryl Ervin, a senior in accounting, got a hole-in-one opportunity. Ervin was one of 25 students selected out of hundreds of applications for the inaugural Lee Elder Internship — a one-week immersive experience at the U.S. Open at the Country Club. 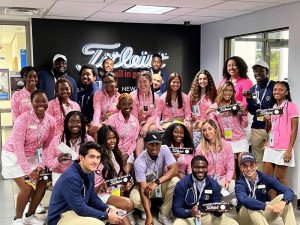 Darryl Ervin (front, second from right) was one of 25 students selected for the inaugural Lee Elder Internship.

Lee Elder was a groundbreaking player: the first African American golfer to play in the Masters and on the U.S. Ryder Cup team. His legacy is providing exposure to golf industry job opportunities and professional development training, ultimately opening doors for students like Ervin, who describes himself in his LinkedIn profile as “just a kid from Detroit dedicated to serving people.”

In addition to earning this highly competitive scholarship, Ervin is finishing a tax internship at Ernst & Young this summer. After graduation in December, he plans to grow his nonprofit, SLS Detroit, which is dedicated to empowering Detroit’s youth through academics, mentoring and community service. An advanced degree is also likely for Ervin, he said.

As a national ambassador fellow for the Leadership Brainery, Ervin heard about the Lee Elder Internship through Brainery cofounder Jonathan Allen.

“It is a special feeling to be a part of the inaugural cohort for such a great initiative, and it motivated me to put my absolute best foot forward for every opportunity that was presented to me so that I could help lay a great foundation for next year’s interns and beyond,” Ervin said. “As Jemal King would say, ‘Your level of exposure will determine your level of success,’ and this opportunity at the U.S. Open has exposed me to so much and has truly opened doors.” 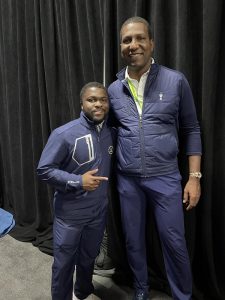 Ervin said some of his favorite experiences included a personal tour of the Titleist plant in Boston, Massachusetts, participating in a  professional development program with Deloitte, having breakfast with incoming USGA President Fred Perpall and NFL great Larry Fitzgerald and building relationships with the Country Club members and staff, including James Cash, professor emeritus at Harvard Business School and part owner of the Boston Celtics.

Fellow Broad Spartan James Piot (B.A. Finance ’22), who was competing in the U.S. Open, also took a photo with Ervin, and the two plan to play golf back at Michigan State University sometime soon.

Ervin said the experiences at MSU helped him build relationships at the U.S. Open, noting that he relied on David Hawthorne, director of the Financial Markets Institute, for some coaching that helped him get the most out of the experience. Hawthorne was the bridge between Ervin and Piot for the photo opportunity.

“I would also like to serve as somewhat of an ambassador of the Lee Elder Internship to get more diverse students at MSU an opportunity to be exposed to the game of golf,” he said.