When General Motors decided to close its Lansing plant 20 years ago, then mayor David Hollister, made a commitment to do something that had never been done in the history of GM: reverse their decision.

That was 1996. Now, three plants, two decades and one iconic campaign later, GM still calls the Lansing region home, thanks to the willingness of local government and big businesses working as a team to achieve a mutually-beneficial solution.

In 2012, Hollister approached Eli Broad College of Business professors Tomas Hult, Byington Endowed Chair, Professor of Marketing and International Business, and Director of the International Business Center, and David Closs, John H. McConnell Chaired Professor of Business Administration in the Department of Supply Chain Management, to collaborate on a book to tell the story behind the remarkable “Lansing Works! Keep GM!” campaign to keep Lansing working. The campaign followed a strategy called the Second Shift model, which ultimately resulted in keeping the Lansing plants open. “Second Shift: The Inside Story of the Keep GM Movement” tells its story.

This Second Shift model refers to the determining key location decision-making drivers for plants and supply chain management facilities, Closs explained. “In this case, a major driver was the need for talent with strong mechanical skills and work ethic. Using the Second Shift at the GM plant confirmed capabilities of workforce, and demonstrated that the talent pool in the Lansing region was exceptional. This differentiated the region from other sites in Michigan and the around the world,” he said. When GM realized the critical importance of talent capability to the next generation of plants, as well as leading edge technology, Lansing proved itself as the one location where such a talent capability could be demonstrated.

“We felt this was a great example regarding how a region can work together to collaboratively achieve a common goal,” said Closs. But there is a personal tie to the health of Lansing for both Broad professors. “We were both living in Lansing during the 90s and saw this movement firsthand. Many in the Lansing-area didn’t understand the direct and indirect impact of GM’s Lansing jobs – which is hard to understand given there were over 20,000 jobs in the region. Sadly, many of those who didn’t understand were politicians; it was a great story to see how Mayor Hollister developed the collaborative environment, orchestrated the teams, and was able to convince GM to stay when they had never changed their mind before,” Closs said.

Both professors’ areas of expertise and thought leadership fall into economic development at local and global levels, which benefited the process of writing the inside story of the movement, and outlining the Second Shift business model that made it happen.

“Second Shift: The Inside Story of the Keep GM Movement” proves how a collaborative problem-solving approach saved a U.S. manufacturing city and how the method can be applied to any community or business. As for the future of American cities like Lansing, Closs is optimistic for those that learn how to work with big business rather than against it, “I think the future is positive for those regions that learn to collaborate.”

Order a copy of “Second Shift” on Amazon. 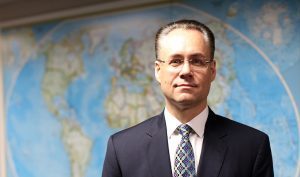 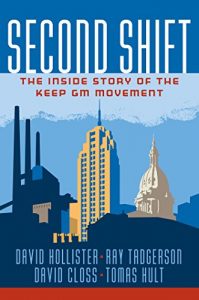 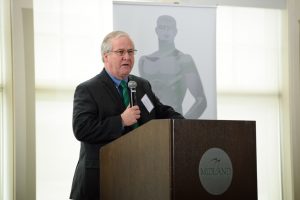